Method cuts testing time from a day or more to less than an hour.

Currently, beachgoers are informed about water-quality conditions based on results from the previous day's sample. Scientists must collect samples in the field, then return to a lab to culture them for analysis — a process that takes a minimum of 24 hours.
Now, engineers from the UCLA Henry Samueli School of Engineering and Applied Science have sped up the process of analyzing bacterial concentrations to under one hour, through the development of a new in-field, rapid-detection method.

A motley collection of boneworms

It sounds like a classic horror story—eyeless, mouthless worms lurk in the dark, settling onto dead animals and sending out green "roots" to devour their bones. In fact, such worms do exist in the deep sea. They were first discovered in 2002 by researchers at the Monterey Bay Aquarium Research Institute (MBARI), who were using a robot submarine to explore Monterey Canyon. But that wasn't the end of the story. After "planting" several dead whales on the seafloor, a team of biologists recently announced that as many as 15 different species of boneworms may live in Monterey Bay alone.

Why do animals, especially males, have so many different colors? 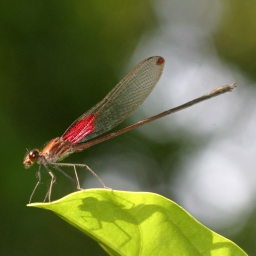 Why do so many animal species — including fish, birds and insects — display such rich diversity in coloration and other traits? In new research, Gregory Grether, UCLA professor of ecology and evolutionary biology, and Christopher Anderson, who recently earned his doctorate in Grether's laboratory, offer an answer.
At least since Charles Darwin, biologists have noticed that species differ in "secondary sexual traits," such as bright coloring or elaborate horns, Grether said. Darwin attributed this diversity to sexual selection, meaning the traits increased an animal's ability to attract mates.But Grether and Anderson, writing in the Oct. 28 issue of the journal Proceedings of the Royal Society B: Biological Sciences, emphasize another evolutionary factor.

Read more: Why do animals, especially males, have so many different colors?

Researchers from the United States and Slovenia have discovered a new, giant Nephila species (golden orb weaver spider) from Africa and Madagascar and have published their findings in the Oct. 21 issue of the journal PLoS ONE. Matjaž Kuntner, chair of the Institute of Biology of the Slovenian Academy of Sciences and Arts and a Smithsonian research associate, along with Jonathan Coddington, senior scientist and curator of arachnids and myriapods in the Department of Entomology at the Smithsonian’s National Museum of Natural History, also reconstructed size evolution in the family Nephilidae to show that this new species, on average, is the largest orb weaver known. Only the females are giants with a body length of 1.5 inches (3.8 centimeters) and a leg span of 4 - 5 inches (10 - 12 centimeters); the males are tiny by comparison. More than 41,000 spider species are known to science with about 400 - 500 new species added each year. But for some well-known groups, such as the giant golden orb weavers, the last valid described species dates back to the 19th century.

Figuring out the heads or tails decision in regeneration

Amputations trigger a molecular response that determines if a head or tail will be regrown in planaria, a flatworm commonly studied for its regenerative capabilities. Until now, no molecular connection between wounding and the decision to regenerate either a head or tail in planaria had been identified.

Read more: Figuring out the heads or tails decision in regeneration

Greater Mekong - A bird eating fanged frog, a gecko that looks like it’s from another planet and a bird which would rather walk than fly, are among the 163 new species discovered in the Greater Mekong region last year that are now at risk of extinction due to climate change, says a new report launched by WWF ahead of UN climate talks in Bangkok.

Read more: New species discovered in the Greater Mekong at risk of extinction due to climate change