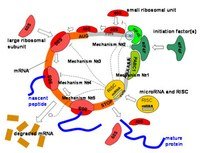 An international team of mathematicians has proposed a new solution to understanding a biological puzzle that has confounded molecular biologists.

They have applied a mathematical model to work out the functioning of small molecules known as microRNAs – components of the body akin to the electronics in modern airplanes.

For a long time molecular biologists thought that the major role of RNA in living cells was to serve as a copy of a gene and a template for producing proteins, major cell building blocks. This belief had been changed at the end of 90s when it was found that myriads of RNA molecules are involved in regulating speeds of practically all molecular mechanisms in a cell. These abundant molecules are essential in regulating the speed of protein production– a vital function in    bodily processes, including development, differentiation and cancer.

The problem to date has been that scientists have differed over interpretations of how the production of the major building blocks of a cell, proteins, is controlled by microRNAs.

Basically, there were different and sometimes conflicting theories about ways in which microRNAs regulate protein production since the results varied depending on only slightly changed experimental conditions.

Professor Alexander Gorban, who holds a Chair in Applied Mathematics at University of Leicester, said: “The old metaphor of an elephant and blind scientists trying to describe it will be always relevant to science. However, often we use it only as a metaphor, as a generic statement. In this project the elephant’s metaphor can be applied literally as a working principle.

“Quite dramatically, there has been a series of reports in top-ranked journals with contradictory results supporting one or another mechanism. Furthermore, researchers are puzzled by the fact that the same couple of protein and microRNA demonstrate different mechanisms of regulation in different biological labs or in slightly changed experimental conditions.”

The mathematical model constructed by Professor Gorban from University of Leicester and Andrei Zinovyev from Institut Curie in Paris in collaboration with biologists Nadya Morozova and Annick Harel-Bellan from CNRS in France showed that there might be one simple mechanism which manifests itself differently in different conditions.  Their findings are due to be published in the RNA Journal.

Professor Gorban said: “We have shown that what appeared to be very different mechanisms are in fact manifestations of one relatively simple biochemical reaction, but taking place in various contexts.

“Our model proposes that microRNA performs many actions simultaneously to the protein development, basically acting to get the job done (regulating the speed of protein production) in a stable and efficient way, given whatever conditions the experiment is occurring in.

“If this model is accepted, we would be able to take active steps in determining what the main mechanism of microRNA action is, as the model suggests experiments to verify the hypothesis.  This in turn should lead to a resolution of a decade long debate to understand the means in which these very important molecules actually work.”

Pat Heslop-Harrison, Professor of Cell Biology at the University of Leicester, said:  "The discovery of miRNA and its regulatory role has completely changed our view of how genes in cells are controlled.

“Understanding all the ways the regulation is happening and interpreting experimental evidence has proved a huge challenge. In this important new paper, Alexander, Andrei, Nadya and colleagues overview the characteristic features of no less than nine different mechanisms, and then generate a unifying model of the whole system integrating the nine mechanisms.

“The multifunctional model gives dynamic predictions of gene control; it can now be tested to understand significance of the various mechanisms coexisiting under different conditions. It will be exciting to link this back the huge range of functions and responses of organisms and understanding miRNA control mechanisms is a systematic and predictive way."