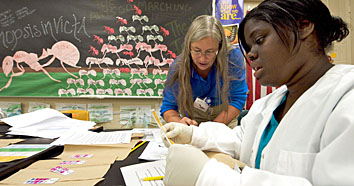 Susan Bender constantly tries new tricks to get her high school biology students hooked on science.  She requires the seniors in her research class at Jim Hill High School in urban Jackson, Mississippi, to don hospital scrubs before they come to class so they will take the subject seriously. She also pushes her students to participate in the science fair and spends many Saturdays at school helping them refine and polish their ambitious projects.

So when Bender heard that scientists at the nearby University of Mississippi Medical Center (UMMC) were designing a high school biology curriculum focused on fire ants, she jumped at the chance to have her class participate. She thought the painfully familiar pests would help focus her students’ attention on science. “The ants may be the bane of our existence,” said Bender, pointing out that almost all of her students have felt the ants’ fiery stings. “But they might also be something from which we can benefit.”
Fire ants are originally from South America, but the invasive species are now pervasive in Mississippi and throughout the South. Their distinctive, mounded nests are found everywhere from backyards to baseball fields. “Male children in the South cannot pass a fire ant nest without kicking it,” said Rob Rockhold, a scientist and administrator at UMMC, in Jackson. Rockhold himself admits to having more than just a passing fascination with the ants. His lab studies the toxic effects of venom from the fire ant, Solenopsis invicta. “It just seemed to me that (fire ants) had to be the logical hook to get these children more interested in science.”

To make that idea a reality, Rockhold joined forces with fellow UMMC researcher Donna Sullivan and scientist William Reznikoff of the Marine Biological Laboratory in Woods Hole, Massachusetts to design a series of high school biology classes centered on the fire ant. They also recruited scientists from nearby Millsaps College, and science teachers from five Mississippi high schools to create the classes. They dubbed the project, Muse of Fire, taking their inspiration from William Shakespeare’s play, Henry V. The project is funded by a grant from the Howard Hughes Medical Institute.

Rockhold explains that the Muse of Fire project will help students learn about subjects ranging from molecular biology and environmental science to toxicology and human health. Teams of scientists and teachers met last summer in Jackson to collaborate on developing the new curriculum.

During the 2009 school year, the five high school science teachers each tested one part of the curriculum in their classrooms to make sure the lessons did what they were intended to do—use fire ants as a springboard to helping more than 160 participating students understand core biology concepts. One teacher took her students on a fieldtrip to observe and document how fire ants affected other insects in their local environment. Another teacher devised experiments that helped students learn how fire ants prey on their victims—in this case, crickets—by using common household chemicals as “stand-ins” for fire ant venom. The students experimented with different doses of “venom” to determine what constituted a fatal dose. A third teacher used modern molecular biology techniques to look for signs of the bacterial invader Wolbachia inside the ants’ DNA. Wolbachia, a natural parasite, is thought to influence the reproductive habits of insects (see: http://www.hhmi.org/bulletin/feb2009/chronicle/ant.html).

Bender’s class teamed up with Sullivan, an infectious disease expert, to study how scientists would identify and isolate chemicals in fire ant venom that might be used to kill cancer cells. Visitors to Bender’s class couldn’t help but notice that she and her students had fully embraced the fire ant theme: A trail of enormous red ants made from construction paper wound its way from the hallway into her classroom, and up the wall toward a brown paper “nest” on the chalkboard. “Students and even other teachers wanted to come into the room and see what the fire ants are and what we are doing,” Bender explained.

The colorful classroom was turned into a mock fire ant research lab when Bender’s biology class spent weeks studying fire ants and using a scientific approach to identify components of fire ant venom that might have medicinal qualities. In a real lab, scientists would use DNA microarrays to test which of thousands of genes are turned on and off when fire ant venom is added to cells. But expense and practicality forced Bender and Sullivan to improvise: Bender built faux microarrays using clear slides, white folder labels, and a sturdy hole punch. She substituted common chemicals for real venom, which can be dangerous. “We wanted to make sure they had a good basis for understanding basic science as it is done in the real world, as well as to be able to translate it into something useful,” explained Sullivan.

Though they did not test real human cells, the students used the microarrays to pretend they were researchers trying to find out whether the venom worked as a cancer treatment in cells from two made-up cancer patients. At tables spread throughout the large classroom, the students dropped liquid from pipettes onto the microarray slides, and watched as the wells turned blue, red, or yellow. Each color change told the students which genes were turned on or off both before and after the cells were treated with venom. If certain genes in the microarray were turned on—specifically caspase 4 and caspase 8—the venom treatment worked and the cells would commit suicide.

Many students participating in the Muse of Fire project said that before taking the classes, they had never considered that the same fire ants that stung them might yield a cancer treatment. “You just scratch and keep going … (then you think) how can something that can be deadly also help you?” said student Alonzo Jackson.

Bender’s students were still buzzing about a class on fire ant-related injuries they attended the previous week, a lesson which was developed by teacher Jammy Hemphill of Forest Hill High School in Jackson. Bender’s students read case studies of real people who had been seriously injured or killed by fire ant stings. After reading the stories, they debated what might have injured each of the people. Was the nursing home patient killed after being stung hundreds of times—or by the hospital staff that treated her condition too aggressively? Did the drunken ranch hand who slept on a fire ant mound exhibit a true allergic reaction, which is fairly common in Mississippi, or did he swell up because he had been stung by so many ants?

“At first I thought our part of the fire ant curriculum was going to be the most boring for the students, but (Hemphill) did such a good job with the histories … it became very interesting,” said Anne Yates, a pediatric allergist at UMMC who helped design the health part of the curriculum.

What most interested students? “I think learning that you could actually die from an ant sting,” said Natalie Offiah, a student in Bender’s class. “You think ‘Oh, it’s just an ant sting.’”

This June, teachers and scientists involved in the Muse of Fire project will meet again at UMMC to talk about what they learned in piloting these lessons and experiments in their classrooms. Their goal is to refine the courses and use them as the basis for a cohesive high school biology curriculum that will be shared with teachers from North Carolina to California – anyone within range of the fire ant. Bender already shared her work with high school teachers from Texas, who said it was one of the best workshops they had ever attended. “Fire ants are a big problem in Texas as well,” Bender said. And she adds, that makes them a good tool for teaching biology.