High Hopes for a New Kind of Gene 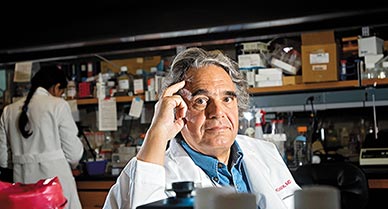 I clutch the seat as the Ferrari halts abruptly at an intersection, then purrs impatiently until the light changes. When it takes off, the roar feels oddly extravagant for the quiet streets of suburban Columbus, Ohio.

The driver is Carlo Croce, a 64-year-old Italian scientist with a big voice, disheveled curly hair and expressive dark eyes. He heads the Human Cancer Genetics Program at Ohio State University, and his silver Scaglietti Ferrari is a fitting symbol of his approach to science: grand, high-powered and, these days especially, sizzling hot.

Croce, who grew up in Rome as the only child of a mechanical engineer father and a homemaker mother, went to medical school at the University of Rome and came to the United States in 1970 to study cancer. "I thought it was the place to work in science," he says. Croce was one of the first scientists to establish that cancer—the runaway growth of cells normally held in check—can be caused by genetic changes. He has identified particular gene alterations associated with lung and esophageal cancers as well as with various types of lymphoma and leukemia.

Colleagues say Croce has remarkable scientific instincts. "If you spread out five things in front of him, he can almost unerringly pick the one which is going to work," says Webster Cavenee, director of the Ludwig Institute for Cancer Research in San Diego. "He can smell something interesting, and he's almost never wrong."

It was a few years ago that Croce began to sniff out one of the most surprising and most promising discoveries in cancer research. The discovery placed him and his collaborators at the leading edge of a now-booming field that promises improved techniques for diagnosing disease and, they hope, more effective new treatments. Indeed, Croce's latest work is part of a whole new way of looking at genes and how life regulates itself. Which makes all the more remarkable the fact that his insight came only after he and his co-workers had raced at top speed into a dead end.

One of the glories of 20th-century science was the 1953 discovery of the structure of the genetic material DNA; it is a long ladder-like polymer twisted into a double helix. Each rung is a chain of chemical compounds, called bases, and their exact sequence encodes a gene's instructions, much like the letters in a word. Over the decades, mountains of laboratory evidence led scientists to make two bedrock assumptions about genes.

First, a gene is relatively large, typically consisting of tens of thousands of chemical bases in a row.

Second, the main job of any particular gene is to instruct cells to make its corresponding protein. A protein is a large, complicated molecule that performs a specific function depending on how it's made: it can be part of a muscle fiber or an enzyme that digests food or a hormone that controls physiology, among many other things.

Certainly Croce held these assumptions when, in the early 1990s, he set out to identify a gene involved in chronic lymphocytic leukemia, or CLL. The blood cancer fills the bone marrow and lymph nodes with cancerous cells that crowd out healthy cells of the immune system, leaving the body less able to fight infection. Croce had analyzed cancer cells from people with CLL and found that many were missing the same long segment of DNA. Somewhere on that segment, he reasoned, was a gene crucial to preventing white blood cells from becoming cancerous.

For nearly seven years, Croce and his colleagues kept zeroing in on different bits of that long-suspect strand of DNA, painstakingly determining its genetic sequence, base by base. They also did numerous experiments testing whether the genes could cause CLL.